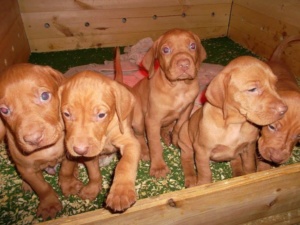 Its ancients could be some kind of eastern hound, which came from Asia to Europe with Hungarian conquests. In the 18th century it was crossbreeded in Hungary with turkish yellowhaired hounds. The breed was developed with more foreign hunting hound species  in the 19th century before it got the characteristics, which are known nowadays. Wirehaired type of vizsla has been known for more than 40 years.

Wirehaired german vizsla was the part of breeding as well. The name „Vizsla” refers to its behaviour. Because of its hunting skills, aristocratic appearence and warm personality it was the favorite of the landed gentry.

Larousse encyclopedia: Vizsla [examine (in Hungarian)]: I. noun A hound dog with floppy ears and long legs which finds, points the wild animals by smell. II. adj Seeking, searching (glance) New Hungarian Lexicon: Vizsla: Kind of hounds which points the wild by smell or seek them, and stop before it to point with the sign of their raised foreleg or their tail standed firmly. Types: Yellow Hungarian Vizsla, Weimaraner, German (wirehaired and shorthaired) Pointer, Würtemberger, Brittany,  etc.

Do you have a question?
Write to us now.